Andrew Jefford (WFW 72, pp.132–37) deems what he terms “wine’s transactional flaw” inevitable, due to wine’s inherent nature as “a highly-crafted, supply-limited comestible product, not a reproducible work of art.” Yet, in one sense, the aesthetic object that preoccupies this journal’s readers seems to enjoy a peculiar advantage in accessibility. When it comes to visual art, apart from certain prints or castings, a single physical object constitutes the original work, and there are good reasons why art lovers—few of whom enjoy the advantage of free admission to London’s National Gallery that Jefford cites—will travel huge distances and suffer long queues in order to encounter that original face to face, as well as why they will mourn works that are off limits or never put on public display. Nor is it clear that those reasons are confined to the inherent imperfections, perspectival limitations, or loss of detail associated with reproduction.

In his 1935 essay “The Work of Art in the Age of its Mechanical Reproducibility,” Walter Benjamin posited that originals are distinguished from reproductions in possessing “aura.” Whether or not Benjamin persuasively explicates this concept, let alone whether it in turn can explain the allure of an artistic original, if a bottle of Château Latour is an original possessed of aura, then so are (or at least, were) roughly 200,000 others. To be sure, there are only a few thousand of a comparably iconic Burgundy like La Tâche, and in extreme Burgundian instances there might be just a 300-bottle barrel or so. Still, there are generally lots of originals to go around; these bottles often travel the globe; and even the proviso that to enjoy them is to destroy them no longer straightforwardly applies in an era of sophisticated wine-preservation systems. That so many people in far flung places can have direct encounters with a given wine—can even share online their concurrent experience of it—seems a wonderful advantage of the genre.

And yet, the shareable potential of wine appears under-recognized and unable to lend it wider respect. Even though Starry Night, like any painting, has a legal owner, this iconic work, as well as the collective creations of Van Gogh, are commonly thought of as no less cultural treasures of humanity as a whole than are Moby Dick or the collected works of Hermann Melville, which are not owned by anyone. Why aren’t, say, Romanée-Conti—both wine and vineyard—and the collective creations of the eponymous domaine widely treated as riches whose loss would be a blow to humankind? Something about wine leads to treating it as an elitist exception among aesthetic objects, something that perhaps doesn’t end with its “transactional flaw.”

This flaw that Jefford also terms a “tragedy,” is arguably due less to wine’s being inevitably limited in production, commodifiable, and comestible than, more fundamentally, to there being nothing that constitutes its reproduction. Even the most fervent believers in an imminent “metaverse” don’t contemplate, much less anticipate, its being populated with virtual Château Latour. (Though several contributors to this very journal have entertained vinous reproducibility as a thought experiment—see WFW 12 pp.74–79 and WFW 25 pp.102–07.) Perhaps this limitation is technological rather than metaphysical; but even if that’s the case, who would dare add the qualification “merely”?

And while Jefford is charactistically eloquent in his lament that “[i]nnocent aesthetic enchantment belongs only to those for whom the price [of a bottle] does not matter,” genuinely tragic loss of opportunity and innocence arguably only applies to wines that have achieved iconic status (with especially unfortunate repercussions for wine education—see WFW 34, p.32). Jefford would have us believe that “[t]he better and more aesthetically interesting the wine, the more exclusive the drinking circle—and the stronger the poison” of price. But his own One Bottle columns in this journal over many years are replete with fortunate examples of impeccably crafted and aesthetically arresting yet affordable wines. The acute problem, one that prompts Jefford to contemplate fondly “a future for something called wine philanthropy,” is with benchmarks and icons—and not just with their unaffordability per se.

Two thousand bottles of La Tâche—let alone eight or ten times as much Château Latour—represents an enormous amount of potential vinous satisfaction. To be sure, gross inequality in distribution is a hugely limiting factor. But set that aside. Set aside also consideration of diminishing marginal utility among those wealthy or lucky enough to taste a famous wine repeatedly. There is another equally salient factor when it comes to accessibility and potential philanthropy. The distinction between shareholders and stakeholders has its analogy here. Shareholders are those who have either exclusive or shared title to one or more bottles of a given wine. But anyone who might one day taste, say 1990 La Tâche, has a stake in that wine. And if its disappearance would be a loss for wine lovers collectively, or even for humanity, then the former and, in at least a tenuous sense, the latter are stakeholders.

A profound problem here is that shareholders don’t always have a stake in the satisfaction to be derived from the contents of their bottles. Much of the world’s great wine nowadays trades as an investment vehicle. Before we can fully recognize, let alone try to mitigate, any tragic implications of wine transaction, we need to ask, for example: How many bottles of 1990 La Tâche will eventually issue in gustatory satisfaction concomitant with that wine’s aesthetic value? Have we even a way of estimating how many bottles remain unconsumed, some of them perhaps doomed to circulate ceaselessly as investment vehicles? 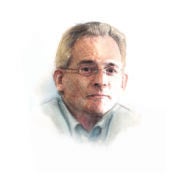